I had a beezer weekend . Friday night was band night and we were playing 'Whistlebinkies' one of Edinburgh's best live venues. I've always liked this place and it's been ages since we have played there. Best of all is that it has a house PA system with an engineer so we always get a good sound. We only have to bring  a minimal amount of equipment so we can do 2 sets and be home relaxing with a beer before 1230. Perfect!

Saturday started well also. I've been unhappy with the sound i get from my amplifier for a long time. Not that there's anything wrong with it, it's just that it doesn't have that x-factor that Fender amps used to give me. So i tried using Gumtree for the first time and posted a free ad on Wednesday evening with a view to selling it and buying a Fender amplifier. Great news, a gentleman from Glasgow contacted me and offered a swap for a Fender supersonic Amp! a higher spec amp than i originally thought I was going to be able to afford. He came over, we tried the amps and did the deal. What a sound! that crystal clear fender 'spank' each time you hit the strings.


The Mesa was chunky but this thing has 10 Valves!! mental! the transformers are huge and the reverb tray is twice as long - most excellent!! can't wait to give it a spin with the band on Tuesday!


I was staying in on Saturday night as Kate was going to a neighbours party and spent the early part of the night catching up with people via facebook and phone. Just as i thought the night was winding down, Kate arrived home around eleven o'clock to declare she was going to bed and i had been invited to the party also. Had a great time and spent a nice couple of hours getting to know some Haddington locals - good bunch of people. Mind you i was home around 1:30 and my body is telling me today that i might be getting too old for 2 late nights in a row these days.
Sunday
Got up on Sunday and we decided to take a refreshing walk in Pressmennan woods. That's the best thing about where i live, there are loads of interesting places to root around. Pressmennan is one of these, owned by the Woodland Trust, Its a wee fairy land, full of carvings and Elf houses cut into trees and the lads ran riot.
Check out the site! it's worth a visit
www.woodlandtrust.org.uk/en/our-woods/Pages/image-gallery.aspx?wood=4908#.TxMxs28-OHg 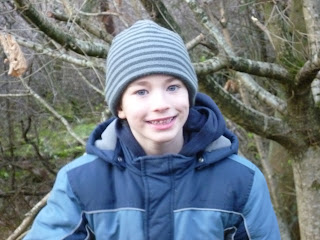 Once we had thrown enough stones and sticks on top of the frozen lake and watched them skitter for miles, we headed home. No problem getting the lads to bed tonight!

Posted by Montanaman at 12:45 No comments:

A week in the capital

Soup and the family have just spent a marvellous few days in London seeing the sights with our friends James and Angela and their son Sam. Got there on the Monday by train and headed out for Trafalgar Square by tube train - I love travelling by tube, its like being in a teleporter, you go in at one place and a few mins later you emerge somewhere completely different! 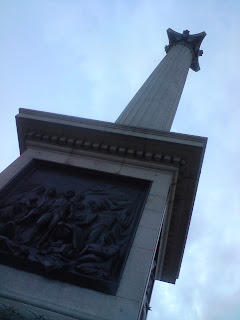 Next day we hit the museums, exhibition row is a great place with the Natural History, Science and V&A museums all beside each other, they are huge! you would take days to see everything each has to offer so we decided:
Great displays in all the museums and the buildings are amazing also.


After that we were walked out, onto the tube again, as good as a rollercoaster for us. In the evening, Joe and sandy stayed with sam and his parents and Mrs Soup and I clambered the tube again bound for Covent Gardens, a walk round the West End to see theatreland, a most impressive view of London at night from Waterloo Bridge and then a nice Italian meal and to bed!
Next day was all about sightseeing and we trawled around Westminster etc ending in James, Joe and I leaving the rest for a cruise down the Thames while we scuttled off to the Imperial War Museum where Joe declared that he thought it would be boring but actually it was fab!


Last day was the big one for the boys and off we headed to Legoland, what a place!! Sandy did his first rollercoaster and giggled forever. Then he passed his legoland driving test, very chuffed.

Posted by Montanaman at 05:36 No comments:

I hate camping! i really do! my brain is just not wired for this kind of living. I mean why would i want to leave my lovely dry warm house with TV, hot water, comfy beds, cooker, fridge, stereo etc to live in a cloth bag, with a wee gas stove in the open, getting eating alive by midgies, being perpetually damp, uncomfortable sleeping on uneven ground - all in the name of a 'nice relaxing holiday'? well mebbe i've got it wrong - hmmm?


Mrs soup and I spent our honeymoon in a tent on the south coast of ireland 12 years ago, it rained in biblical proportions for seven days and seven nights? the tent gave up on day 2, facilitating a surreal days hunt for a new tent (another story in itself!)

Mrs soup and I tried again in the wilds of Glencoe where the groundsheet ended up being rigged as a roofsheet just to exist outside the tent. We tried a roadtrip over Scotland which ended up with the coldest showers ever, 2 tons of concrete 1 inch below wherever you tried to put a tent peg in and a realy bad cold to boot!

At this point i gave up! Mrs Soup loves nothing better than a night under canvas with our 2 boys and has had to do this herself for the last 7 years which gives me no sense of guilt whatsoever as each time i sit in my comfortable, quiet, empty house with a nice cold beer, a good WW2 documentary and an excellent Chicken Dhansak from the local Indian restaurant, i always recieve a call in which i can hear wailing children and rain hammering off canvas. As i hang up each time, i have to admit, i snuggle a little deeper into the couch as i contemplate a nice deep bath before i pop another can of beer and enjoy Rommel's further exploits in the Libyan desert narrated by Lord Olivier!

I may have been slightly wrong!

A campaign of intense psychological bullying over a couple of months from the other soups persuaded me to try camping one more time. Location: Mallaig!  4000mm (yes! four thousand! 400cm 4 metres!) of rain per year! Great! i thought, another way i can say never again! the die is cast! they will never push the point again if i do this. so off we went.....

5 hours driving later, we arrived. set up the tent, connected the stove, inflated the mattresses and the rain started once i'd lost 2 pints of blood to the 'Mallaig-greater vampiric -Midge' great! i thought, one more point to the home dwellers!, lots of booze with our friends who were camping as well and off to bed where i spent a miserable night sliding down an uneven mattress onto soupboy jnr while the rain hammered on the tent and Mrs Soup's mattress was secretly deflating as she slept (surely she'll get the point now!).

Woke up early, groggy, damp and had to endure coffee in a plastic mug (Lesson 1 - take a decent mug! it takes up the same volume as a plastic one and makes coffee taste so much better!). Thought "this is it! they'll never ask me again" anyways, after coffee, my friend Scott and I took a drive into Mallaig for barbeque food and then things suddenly changed! Scott is an avid fisherman and i decided i might as well give it a try, so off to Loch Morar we went and hired 2 boats for the clans to peruse in while we marooned ourselves on an island in the loch and spent an afternoons fishing, BINGO! what a great afternoon. Really enjoyed fishing and made a mental not to do lots more of this.


Rained like hell for the BBQ but was feeling fresh after the fishing so it unusually didn't seem so bad to cook beans with a groundsheet over one's head?

Fortune smiled, a perfect day in every way, got to the beach and did beach stuff all day, swam, fished, paddled, rock pooled, picnic'ed, crabbed, even laughed! great day, even spent the evening fishing off the rocks when the tide was in. Must say, the sands of Morar are a joy to behold and must be recommended to everyone to visit at least once in their lives!

Next day, rain again - so what! i was returning to Soup HQ this morning to spend a day drying things out but seeing as it hasn't stopped raining in Haddington since (or Scotland for that matter) the garage is full of damp stuff - little lost!

Posted by Montanaman at 16:12 No comments: